Iowa crops are experiencing an intense weather pattern this summer. Despite rain over the past week, some parts of Iowa are still in need of more moisture in order to benefit crops. Some storms were so severe it ended up causing damage to crops. Iowa Secretary of Agriculture Mike Naig said that the moisture is very needed, however there were flash floods in southeastern Iowa.

Northwest Iowa has reported to have inadequate soil moisture in over two-thirds of topsoil. In the opposite part of Iowa, the southeast, 60 percent of topsoil is adequate to surplus.

Despite the intense changes, crop conditions have been stabilized, and 60 percent of Iowa corn is in good to excellent condition. Soybeans are also blooming earlier than past years.

Gov. Kim Reynolds has given approval for state resources to be used in order to recover from the effects of this severe weather. This can apply to qualifying individual residents who are damaged by the weather.

On Monday, the Biden administration announced plans to provide $1 billion in additional funding for FEMA in order to prepare communities for the increasingly destructive hurricane season.

The additional funding will double the current financial size of the Federal Emergency Management Agency program which gives states and local governments money to reduce vulnerability before a disaster occurs. The majority of the funds will go to FEMA’s Pre-Disaster Building Resilient Infrastructure and Communities (BRIC) program which seeks to shift federal funding from reactive spending to proactive investment in community resilience. Additionally, a small portion of the funding will directly support disadvantaged communities.

After years of record storms and wildfires as well as recent assignments to administer coronavirus vaccinations, many FEMA staff members are worn out. Furthermore, the increased funding is expected to cause an even larger administrative burden for FEMA. Regardless, scientists anticipate this hurricane season to be “above-normal” with as many as 10 hurricanes expected, including three to five hurricanes reaching Category 3 or higher. Climate change has caused hurricanes to become more powerful and destructive, making FEMA’s capabilities of increased focus in Washington.

In Iowa, FEMA provided more than $33 million in aid to help communities recover from the derecho which struck in August 2020. Weather patterns such as derechos’ are expected to increase over the next few years in the Midwest, resulting in decreased agricultural productivity and increased flooding and drought. 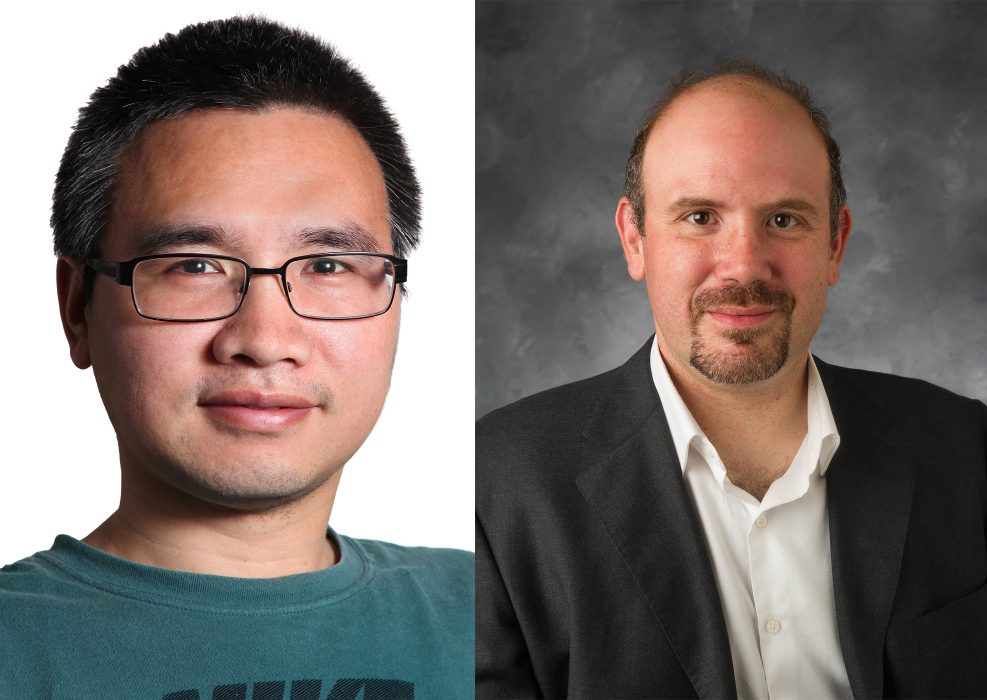 Climate scientists at the Iowa Institute of Hydraulic Research (IIHR) found rising greenhouse gas concentrations caused by human activity have increased the frequency of flooding in Iowa and the midwest.

Led by IIHR researchers Wei Zhang and Gabriele Villarini (IIHR director), the study focused on the weather type known as the “Midwest Water Hose” (MWH). The MWH carries moisture from the Gulf of Mexico to the midwest where the moist air meets cold dry air from the north. More than 70 percent of total precipitation in Iowa during the first five months of 2019 is accredited to this weather system.

Results from the CMIP6 climate model used in the study showed natural climate variations were unable to explain why the MWH has been occurring more frequently over the past 40 years. However, when Zhang and Villarini accounted for rising greenhouse gas concentrations the model reproduced the increase in the occurrence of the MWH.

Flooding along Iowa’s eastern and western borders in 2019 resulted in $1.6 billion in damages, according to the Des Moines Register. “…This type of flooding in this region is expected to become even more likely in the future if we do not take immediate actions to cut greenhouse gas emissions” said Zhang.

The damage caused by floods often impacts communities for years to come. “We still are seeing the very real impacts of the 2008 flood in effect over ten years later, because of the level of damage to university and city infrastructure,” Iowa City Assistant City Manager Ashley Monroe said to the Daily Iowan.

The study was published on March 1st in the scientific journal Philosophical Transactions of the Royal Society, Mathematical, Physical, and Engineering Sciences.

Experts are concerned that the drought conditions currently affecting Iowa are likely to continue into the coming crop season.

According to the U.S. Drought Monitor approximately 11% of Iowa is experiencing drought conditions and most of the affected counties are in northwestern Iowa where dry conditions have persisted for most of the year.  There is hope that spring snowmelt could address some of the moisture deficit, particularly if the snow melts slowly which would allow the soil to absorb the water.  Experts believe that reliable spring rainfall could help make up for dry conditions, however, Iowa is predicted to have less spring precipitation than normal because of persistent La Niña conditions in the Pacific Ocean.

Northwestern Iowa has recently experienced tough conditions as two years of dry soils have followed the heavy flooding in the area back in 2019.  Drought conditions can induce stress in crops which may lead to damage and reduced yields for both soybeans and corn.  After a year of uncertain crop markets, another year of drought is likely bring added difficulty for Iowan farmers.

New scientific research will make it easier to predict the path of devastating megastorms and enable communities to better prepare for flooding.

Mesoscale convective systems (MCSs) are megastorms that affect communities all over the world. They can be bigger than the size of England and travel over 600 miles over a period of anywhere from a few hours to two days. They often cause major damage to infrastructure and livestock, and severe flooding triggered by these storms can threaten human lives. In the Sahel region of Africa, MCSs have tripled in frequency since the 1980s due to global warming, according to an article published by the UK Centre for Ecology and Hydrology (UKCEH).

Until now, it was difficult to predict the path of MCSs. However, a new study conducted by the UKCEH found that land surface conditions affect the direction and intensity of megastorms after they form.

“It is well known that heat provides thunderstorms with great energy, but it was commonly thought that once they are moving, they were not affected by the state of the ground over which they travelled. However, we found that drier soils increased the intensity of an MCS mid-storm, affecting the amount of rainfall they release and also where they travel. Conversely, we found storms were often weakened over moister soils,” said lead author Dr. Cornelia Klein of UKCEH.

This new information has allowed scientists to develop online tools to forecast the path and strength of approaching storms – a breakthrough that will increase warning times for affected communities. It may also enable better decision making by town planners and farmers at the center of MCS hotspots and increase the resiliency of their economies.

As of July 8th, the US has already experienced ten weather and climate disasters where the losses exceed one billion dollars.

Climate projections suggest that severe storms will increase in both frequency and intensity supporting the need for increased disaster relief funding to address the prevalence of expensive disaster clean-up.  Surprisingly, the storms responsible for almost half of the billion-dollar disasters since 1980 have been severe thunderstorms rather than hurricanes or floods.

Iowa has recently been involved in the billion-dollar disaster figure with the 2019 Missouri river floods which caused around $1.6 billion in damages.  As weather patterns become more severe, the likelihood storms reach the billion-dollar mark will increase making events like the 2019 floods more common events for Iowans.

A new report from the First Street Foundation shows that flooding risk across the country is likely under represented.

New calculations reported in “The First National Flood Risk Assessment” suggest that almost twice the number of properties have a heightened flood risk compared to the FEMA Special Flood Hazard Area (SFHA) 1 in 100 layer.  The SFHA identifies properties with a heightened flood risk and influences decisions made for flood insurance and housing mortgages. FEMA identifies around 8.7 million properties to be at risk from a 100 year flood while the new risk assessment estimates 14.6 million properties to be at risk.

To estimate the 14.6 million properties, the new report included small creeks that were ignored on federal maps, rainfall and sea-level rise.  The risk assessment includes areas where flood mapping is either incomplete or out of date which contributes to the increase in the number of at risk properties.

For Iowa, the report suggested an additional 141,300 properties were at risk in the state compared with the SFHA measure.  The report identified Council Bluffs as the city with the most properties at risk (11,000 properties), followed closely by Des Moines (9,000 properties).

Parts of Eastern Iowa saw heavy rainfall and flash flood warnings yesterday as what was left of Tropical Storm Cristobal moved into the Midwest.

Tropical storms over the Gulf of Mexico usually break up before they reach Iowa, but this one remained a post-tropical depression in an extremely rare phenomenon, according to Meteorologist Brooke Hagenhoff at the National Weather Service. This system brought an abrupt end to the hot, humid weather that eastern Iowans had been experiencing as it was followed by a cold front that brought cooler, dryer conditions, according to an Iowa News Now article.

The post-tropical depression caused heavy rainfall in the state, and flash flooding occurred near waterways and in low areas. Along with posing threats to human safety, flash floods can also raise environmental concerns. Floods have the ability to pick up hazardous chemicals and materials and transport them into waterways. This can threaten the safety of drinking water as well as the plant and animal life that rely on Iowa’s waterways.

Coastal marshes in the Gulf of Mexico have been shown to have tipping points in a new study.  Tipping points, are when coastal marshes are unable to keep up with the rate of sea-level rise and become submerged over time destroying the marsh ecosystem.

Sediment cores were used from the Mississippi Delta to investigate how coastal marshes reacted to changes in their environment over the past 8,500 years.  Researchers found that even a small increase in the rate of sea level rise would result in large areas of coastal marshland becoming submerged.  Researchers found that rates above 3 millimeters per year is the likely threshold for coastal marshes to survive.  Unfortunately, current rates of sea-level rise are beyond that threshold suggesting that the remaining marshes in the Delta will likely drown within the century.

Coastal wetlands, such as marshes, are one of the most valuable ecosystems in the world.  They are extremely productive regions that have significant environmental and economic benefits.  They provide homes for diverse ecosystems that can benefit species diversity which results in robust fisheries.  Coastal wetlands also provide flood protection and erosion control for coastal areas which help to reduce the effect storms have on the coastline.

As coastal wetlands in the Mississippi River Basin are stressed from sea-level rise, they are also inundated with sediment and nutrients flowing from upstream.  Iowa is a major contributor to this issue and even though efforts are underway to alleviate the stress, coastal wetlands will be negatively affected by the state’s agriculture for years to come.

In a recent flood forecast update, the National Weather Service predicted that sites within the Upper Mississippi River basin will have a lower risk of reaching major flood stage this spring than previously predicted.

Dubuque, for example, saw the probability of having a major flood event drop from 51% to 37%.  Even though the decrease in flood risk is encouraging, the flood risk for Dubuque is still well above the historic probability of 12%.

The reason for this decrease in flood risk is that the bulk of spring snowmelt will have moved through the river basin by the end of March.  Even though there is improvement, the river basin still has a high risk of flooding due to the potential combination of residual snowmelt paired with above normal spring precipitation events.

One tool for Iowans concerned about floods is the recently updated Iowa Flood Information System where a statewide sensor network provides real-time information about Iowa’s waterways.